This is the second in a series of blog posts. Read the first part here.

As attorneys, we are generally fairly skeptical and like to understand what we are agreeing to do. As a result, I want to generally explain the science behind the proprietary sound-assisted meditation (SAM) technology used in the Legally Mindful® exercises, as well as explain a little about brain waves and how the Legally Mindful exercises work with your brain waves to help you achieve success in your meditation practice, as well as in your waking life.

To understand how TMI’s new sound technology helps create and cultivate particular meditative states, you first need a very basic understanding of brain wave patterns. Our brains operate on electricity – that is, the firing of electrical impulses (waves) between neurons in our brain. Brain waves are essentially a measurement of the electrical activity in the form of nerve impulses being sent to and received from different parts of your brain. EEGs are used to measure both the frequency (in Hz or cycles/sec) and amplitude (in microvolts) of brain waves. 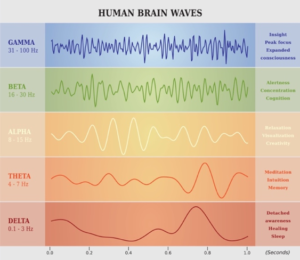 Achieving optimal patterns of brain waves is the key to being in a high-functioning mental state. Generally, different mental states exhibit different “typical” patterns of brain waves. For instance, when we are awake and working, our brains are predominantly producing brain waves in the Beta range (see the “Human Brain Waves” graphic). When we are sleeping, our brain wave patterns will be dominated by the much slower Delta waves. The typical “meditation” brain wave pattern includes a reduced amount of Beta as there is less of a need to be alert and awake, as well as increased Alpha (relaxation) and Theta (meditation) waves. Experienced meditators and those people able to get into deeper meditative states are likely to produce more of the faster Gamma (peak focus) waves, in addition to Alpha and Theta waves.

Beta waves are important to keep us alert and aware. However, when we are stressed or anxious – such as when our “fight, flight or freeze” response kicks in or when we start ruminating about bad things happening – our brains produce discordant waves in the “high Beta” range. Our bodies react to these jarring, incongruous high Beta waves by producing associated and specific stress-related hormones and chemicals. When this happens, our brains do not operate at an optimal level and our ability to retrieve information and make good decisions is diminished. One of the key benefits of meditation is to reduce the occurrence of such automatic mind/body reactions to stress and anxiety. As we learn to react more consciously to stressful situations, our brain wave patterns improve and, in time, reacting to stress in positive ways comes more naturally.

TMI’s original sound technology, still used in most TMI programs, is called Hemi-Sync®. This technology uses specific sound patterns to prompt your brain to produce binaural beats to help you move into desired brain states in meditation.ii For example, if you wanted to focus a meditation exercise on relaxation, the exercise would induce binaural beats in the Alpha and Theta ranges. At the same time, there would likely be some Beta waves included to help keep you from falling asleep during the meditation. Similarly, you would find differences in the combination of sound waves used to get you into an enhanced creative state, or a focused concentration state, and so on.

Research has shown that by providing these sound waves through headphones or speakers on both sides of your head, the human brain has a tendency to follow the exercises’ sound waves into a particular, desired brain wave pattern, which is called a frequency following response. As a result, each exercise would use a proprietary combination of sound wave lengths to encourage your brain to move into a desired meditative state. The frequency following response for binaural beats is thought to be very good for brain waves between Delta and Beta, that is 30 hertz (Hz) and below.

TMI’s newest sound-assisted meditation technology is able to produce all of these sound waves, as well as Gamma waves at frequencies above 30 Hz to 120 Hz or more. Scientific research identifies Gamma with attentional awareness and whole-brain synchrony – that is, coherence across the range of brainwave frequencies and regions (when the Gamma is not part of a stress pattern in high Beta/low Gamma, e.g., the “fight, flight or freeze” response). 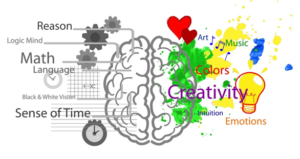 You are all probably familiar with the general characteristics of those who are considered left brain dominant or right brain dominant. When most people are awake, the brain waves across the two hemispheres are often incongruous. With experience with meditation in general, and with SAM in particular, the brain wave patterns across the hemispheres become more in sync and our brains operate more effectively and at a higher level.

Many lawyers are very analytical and would tend to be more left brain dominant. Through meditation, the left-brain dominance is decreased, facilitating more creativity, and other right brain characteristics. (The converse should also be true for right brain dominant people.) The best thing is that the more experience you have with meditation, the more lasting is that whole brain synchronization. Here’s an easy illustration that science supports in relation to your brain: Imagine you consistently exercise only one arm, your dominant arm. The muscles in that arm (neural pathways in the brain) become much stronger than the non-dominant arm. But, when you start exercising both arms, the non-dominant arm becomes stronger and, over time, more closely matches the strength in your dominant arm. Just so the brain. The neural pathways you build and use through meditation across your brain’s two hemispheres, now synchronized, become stronger, and accessible in your waking life.

The SAM sound technology found in the Legally Mindful exercises acts to speed and facilitate this synchronization and allows you to get into a desired meditative state faster and with greater ease and success than traditional meditative practices alone.